[Image description: A protest in Krakow’s town centre. There is a sign held aloft bearing the message (in Polish) “We are many and we are very angry”]

This March, I found myself in Krakow’s historic main square with a group of fellow KU students, waving a wire coat hanger and screaming “Hańba!” (disgrace) along with hundreds of protestors. After spending five weeks immersing ourselves in the issues around reproductive health and rights in Poland, we were thoroughly invested in Polish women’s efforts to resist repeated attacks on their reproductive freedom (1), and seized the opportunity to join them in protest. Abortion rights are an important issue for the global health community, and have been in the news frequently in 2018.

At the start of the year, a draft law was brought before the Polish government that sought to restrict circumstances in which legal abortion was possible. The existing law is already one of the most conservative in Europe, allowing abortion only in the case of severe foetal impairment, severe threat to the mother’s health, or when the pregnancy is a result of rape or incest (2). The “Stop Abortion” law proposed to remove the foetal impairment clause, which currently accounts for 96% of all legal abortions in Poland; approximately 1,046 last year (2). During our fieldwork module we learned that the number of illegal abortions in Poland is likely far higher- estimated between 10,000 and 150,000 per year (2)- and the lack of access to safe and legal procedures is a major driver of this.

In the style of the “Black Friday” movement in 2016 (1), an enormous protest took place in Warsaw on Friday 23rd March. Approximately 55,000 people marched, most of them young women, and simultaneous protests took place in many of Poland’s large cities (3). Subsequently, the governmental committee involved stated they would not proceed to debate the law for the foreseeable future. According to Federa (the Federation for Women and Family Planning), a Polish pro-choice NGO, the draft law was in fact debated earlier this month, but was referred to a subcommittee and is unlikely to progress further any time soon (4). However, powerful lobbying by the church-backed anti-choice movement remains a concern, and the fight is far from over.

Personally, participating in the protest was an opportunity for me to show solidarity with Polish women, and express my anger and frustration at their government’s increasingly repressive policies. The experience cemented my understanding that Poland is not the heterogeneously conservative nation we often see portrayed in the media; there is a significant progressive movement with well-organised activists working hard to resist the current right-wing government. 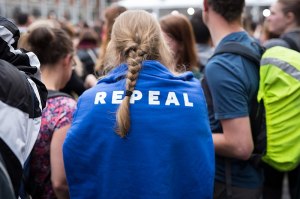 Meanwhile, the Republic of Ireland had one of the most restrictive abortion laws in Europe, but made international headlines in May when a historic referendum paved the way for increased access to legal abortion (5). The Irish constitution’s 8th amendment regarded a foetus as human from the moment of conception, meaning that its right to life was equal to the mothers in the eyes of the law (6). To obtain an abortion, women had to either travel to England, or illegally procure pills online. Social media projects such as “In Her Shoes” put a spotlight on these women’s stories (6), humanising a previously taboo subject. Despite interference from US-based pro-life groups (6), the Repeal the 8th campaign effectively utilised social media to gain support, resulting in a huge turnout of young voters in support of a yes vote (5). Attention has now been drawn to Northern Ireland, the last area in the British Isles where abortion is only allowed in cases where there is serious danger to a woman’s life or health (7). There were just 13 legal abortions in Northern Ireland during 2016-2017 (8). In June, an appeal brought before the UK Supreme Court was overturned on a legal technicality, however the majority of judges stated that the existing law was incompatible with the European Convention on Human Rights (9).

Adjacent to these three cases, a recent report placed a spotlight on the issue of so-called “conscientious objection” by medical providers, which limits access to reproductive health services across the globe (10). For example, in Chile, abortion was recently legalised in specific circumstances; a more progressive approach than the previous blanket ban. However, changes in the law this year allow entire private hospitals as well as individual practitioners to refuse to provide these services without giving a reason. Thus, in reality, access to abortion remains very limited (11). The report by the International Women’s Health Coalition argues that “International human rights standards to date do not require states to guarantee a right to “conscientious objection” for health care providers”, and that these allowances impede women’s access to care (10). They also argue that the use of such loopholes to decline abortion services should be more appropriately referred to as “refusal to provide services” rather than “conscientious objection”, as the latter has been co-opted from those who refused military conscription and implies negative social consequences for the objector.

It’s well-known among public health professionals that access to safe abortion reduces a population’s maternal mortality rate, while restricting access leads to increased complications and maternal deaths from unsafe procedures (12). However, in many countries, cultural and religious norms have historically influenced policy, and the rising tide of populism threatens to uphold these archaic values. Abortion rights exist at the intersection of population health, gender equality and human rights, and are therefore of vital importance for the global health community.