Can you recognize Copenhagen’s famous sights? These pictures were taken in the beginning of August. For more than two months, it did not rain and Copenhagen experienced an unusually hot summer. People had almost forgotten the otherwise normal feeling of biking to work and getting drenched in the rain. There is no doubt that most of us enjoyed the almost Mediterranean climate – being able to go swimming in the harbour every day and keeping our rain jackets in the closet. But the extreme temperatures and lack of rain also have had severe consequences for wildlife, plants and agriculture, and are undoubtedly connected to climate change.

What seems to have been responsible for the hot summer in Europe is the so-called “Northern jet stream” that stayed in the same particular pattern for an unusually long period. Events like this can cause the weather to stop changing in the area that is affected. Heat waves as well as very cold periods are prolonged; extreme weather conditions become more and more normal.

Are you wondering what jet streams are? They are like “rivers” of wind, high up in the atmosphere that run from west to east, and exist in both the northern and southern hemispheres. Jet streams are major determinants for weather conditions because they push masses of air around and separate the cold and the warm air. Since the temperature at the Arctic has increased, the temperature difference between Arctic and subtropics has dropped, causing stagnancy of the jet stream in often-extreme conditions.

The shocking results of this summer’s heat wave were even seen from space, as the German astronaut Alexander Gerst discovered. In the beginning of August, he tweeted a picture and reported: “Just had a chance to take my first photos of dried-out Central Europe and Germany since a few weeks, and was shocked. What should have been green, is now all brown. Never seen it like this before”. 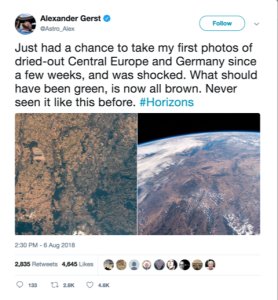 Heat waves like the one in Denmark and most parts of Europe do not only impact nature but also our health. High temperatures can cause death directly from cardiovascular and respiratory disease, especially among older people. Indirectly, they cause an increase in levels of ozone and other pollutants, which can lead also to cardiovascular and respiratory disease. Meanwhile, asthma becomes an even bigger health issue because levels of aeroallergens such as pollen rise, triggering acute attacks. Around 300 million people globally suffer from asthma, and the burden of disease is likely to increase with rising temperatures.

Big changes are needed in politics, because even if we succeed in achieving the goals of the Paris agreement – which still requires a lot of progress – the planet is in danger of becoming a “Hothouse Earth”. According to a recent article published by an international team of researchers in the academic journal Proceedings of the National Academy of Sciences, the earth will warm up by 4 to 5 degrees Celsius in the future and the sea level will rise by 10 to 60 meters. The authors are not yet able to say exactly when climate change will be irreversible but they state that it will reach a planetary threshold, which, if crossed, makes the stabilization of the climate impossible and will lead to an extreme rise of temperature to the extent that our world will not be as we know it anymore. The American climate scientist Michael E. Mann tweeted a warning in July, saying: “What we call an ‘extreme heat wave’ today we will simply call ‘summer’ in a matter of decades if we do not sharply reduce carbon emissions”.

As Yosef Jabareen states: “Prospects for the future are dire indeed, unless we act collectively to alter our energy-dependent lifestyles”. This, on the one hand, demands much re-thinking on the individual level. One thing Copenhageners have perfectly incorporated into their lives is to favour their bike over the car, even in extreme weather conditions. But there are many other ways we can change our habits towards a more sustainable lifestyle. On the other hand, climate change must become a priority on the political agenda. One important movement to demand action from politicians was the climate march in Copenhagen on Saturday, which was organized parallel to 800 marches in 90 different countries globally. Approximately 15,000 people marched in Copenhagen – an increase of 14,000 from last year. After directly experiencing the effects of climate change over the past few months, perhaps Copenhageners have been inspired to take action?